The word “Baikal” comes from the Turkic language and originally means “a wealthy lake”. It is wealthy indeed, as its 1,640 meters depth it is the deepest and largest lake on our planet. It is also one of the cleanest ones as its transparent water is richly saturated with oxygen.

It is also the most ancient lake on the planet - the age of Baikal is estimated at 25 million years. At the same time Baikal is one of those rare spots on the earth where nature has still remained genuine and untouched. The magnificent landscapes – the lake is surrounded by high mountain chains - and the unique clarity of the water made lake Baikal famous as one of the biggest nature wonders of the world. The Siberian forests - dense taiga and sparse tundra - are bordered here with the Asian semi-deserts and stony steppes. This mixture has contributed to the unique flora and fauna world of the lake: you can find here more than 2,600 animal species and 1 thousand plants, 85% of which exist only at Baikal. 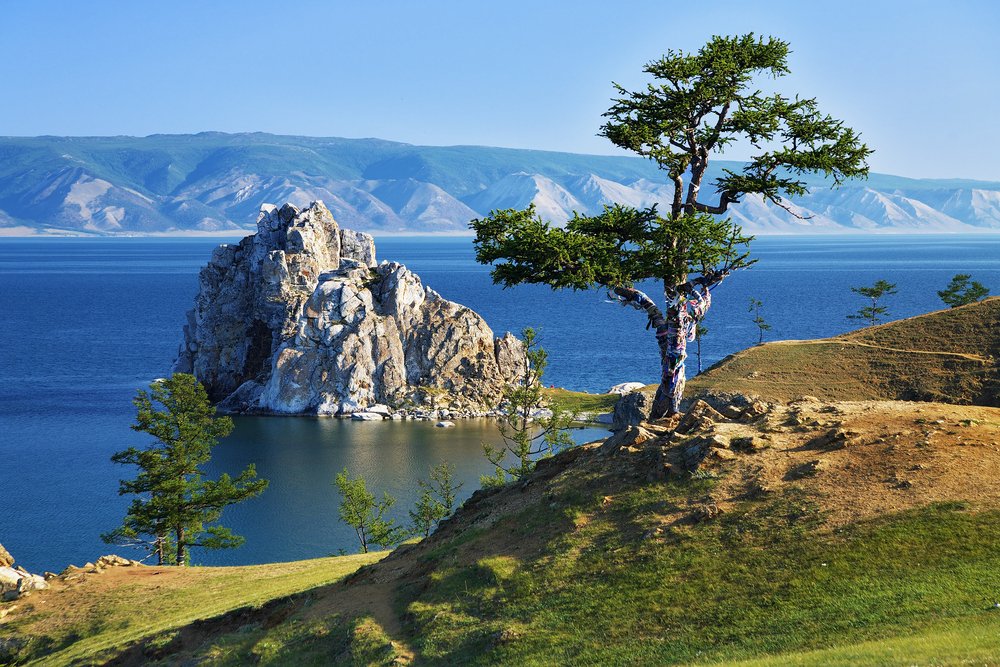 The hydrology of the lake is also interesting: more than 300 rivers flow into the lake while only one, the Angara River, starts from Baikal. The North- and South-Baikal coasts have many warm thermal springs and the water temperature along the coast in summer reaches 16-17C. The average water temperature is about 4?C. In winter the “Siberian Sea” is covered with a thick (up to 110cm) layer of ice. During the end of June – beginning of July every midnight at Baikal you can enjoy the magic view of a moon rainbow, a unique phenomenon caused by the small water particles lifted up from the lake surface by the pull of the moon.

Lake Baikal has always been one of the most sacred places in Asia. For thousands of years, people believed in the powerful energy of the lake and came here to seek nature's assistance. Everywhere along the shore you can see today stone carvings and ruins of these traditional Baikal ritual monuments.

The heart of the lake is the island of Olkhon, glorified in many legends. It is the largest of the lake's 30 islands and it contains 143 unique archeological objects – graves, remains of ancient settlements, ruins, shaman worship monuments and many others. According to the local people it is in the famous Burkhan cape on Olkhon where the powerful spirit of the lake lives. In the past only shamans were allowed to enter its sacred cave.

The largest part of the Baikal area is populated by Buryats, an aboriginal Asian people, who came to Central Asia around two thousand years ago. The main city of the Republik Buryatia, Ulan-Ude, is located about 50 km from the South-East of the lake. Many Buryats are Buddhists and in Ulan-Ude you can to see the largest and most renowned Buddhist temple in Russia – Ivolgin Datsan.

From its Western side the lake is bordered by the Irkutsk region. The city Irkutsk has its own long (over 400 years) and very interesting history. The city's classical Russian architecture dates from the 1880s, when the city boomed after gold was discovered in the area.

There are many reasons to visit the lake and experience the way of life over here. The usual activities of adventure tourism like trekking, biking, kayaking, fishing or jeep-safaris are all the more memorable when they are carried out at this magic lake.


CLIMATE AND WEATHER OF BAIKAL

The volume of the lake’s water and its surrounding mountain chains have created a very special microclimate around the lake. The average air temperature may differ here up to 10o? from the average temperature in Irkutsk which is just 60 km from the lake (at Baikal it is wastonermer in winter and cooler in summer). The lake has clear sky overhead most of the year, and long periods of rainy weather are relatively rare. October and November as well as April and the beginning of May are not recommended due to unstable weather conditions. The roads around the lake might be also blocked during this time.

The geographical and historical centre of Lake Baikal is the Olkhon island. It is the largest of the 30 islands on the lake (77 km long) and a reserve of breathtaking scenery: sandy beaches, taiga forest, steppe bounded by orange cliffs. The channel between this island and the mainland is one of the few places at Baikal where water is warm enough for swimming in summer.

Thermal springs in the north and south of Baikal.

The wooden and stone Russian architecture monuments in Irkutsk, including historic Orthodox churches.

The open-air Museum of wooden architecture in Talzy which is located in a picturesque forest on the bank of Angara river, 47 km from Irkutsk and 23 km from Lake Baikal. It represents settlements of the local Baikal people - Evenks, Russians, Buryats - and gives an overview of the traditional life style in Siberia in the 17-19th centuries.

Ivolginsky Datsan is the Buddhist centre of Russia. Its well-preserved temple is among the best historical samples of Buddhist architecture in Russia.

The old “Baikal railroad” - a unique memorial to engineering art from the beginning of the 20th century, which all 39 tunnels were built without machines. The rail goes through the rocks along the Southern shore of Baikal. It is called “the golden buckle of the Transsib’s steel belt of Russia”.

Khoboy Crag is located opposite the widest part of Baikal (79,8 km). There’s a special site (a small platform) that was used for meditation and performing “tailagans” – gatherings of shamans. From the cape one can often see Baikal nerpas –the world’s only fresh-water seals and the lake’s only aquatic animals.