Elbrus - the Highest Mountain in Europe

If someone asks you what the highest and most beautiful mountains are in Europe, your immediate answer will probably be “the Alps”. However, the highest and most unique in mineral resources, relief, flora and fauna are the mountains of the Big Caucasus. This mountain range includes five peaks of over 5,000 meters above sea level, the most famous of which, the majestic Elbrus, is a “must” for all mountain lovers and professional mountaineers.

Just the fact that this mountain is the highest in Europe and is one of the world-famous “Seven Summit” peaks makes some people excited to see it and, finally, to conquer it. The mountain belongs, however, to a small number of mountains in the world which also attract people by their unique beauty. The ascent to Elbrus requires only basic mountaineering skills, although high altitude and unpredictable weather make the climbing more serious and challenging than it may seem. 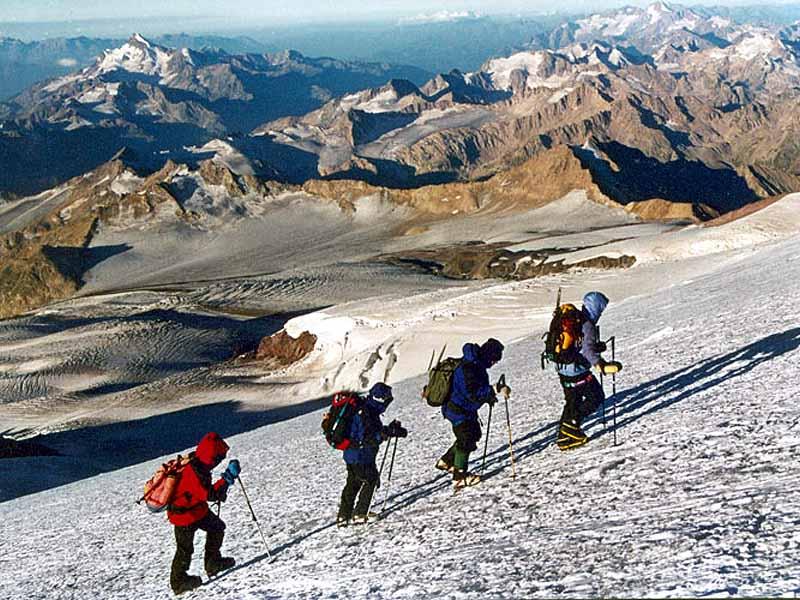 The local name of Elbrus is Mengi Tau, which means “The Mountain of a thousand mountains.” This name is justified, as the glaciated giant slopes are built of thickened lava flows and both peaks of Elbrus are more than 1,000 m higher than the rest of the Caucasus Chain. The translation of the name Elbrus from Arabic means “white mountain,” as it is always covered with snow.

The official date of the first ascent of Elbrus is still being argued: the Russians believe it was 1829, when the Caucasian Killar Khashirov, a local guide for a Russian expedition, reached the top. The first foreigners reached the Eastern Summit (5,621m) in 1868 and the highest Western Peak (5,642m) in 1874. Today, Elbrus and the whole Caucasus mountain range are being rediscovered by Europeans and Americans who seek what the first conquerors found: dramatic new experiences, unforgettable mountain beauty, and closeness to the purity of nature.

Surprisingly, this wonderful land of high snowy peaks surrounded by old virgin forests, peaceful lakes and wild rivers is not lost in the remote vastness of Russia. The Caucasus chain is located in the south of European Russia, stretching for more than a thousand kilometers from the Black Sea in the west to the Caspian Sea in the east.

Historically, the political situation in the Caucasus was always changing. For centuries, Caucasian tribes were invaded by others like the Sarmats and the Huns. As a result, some Caucasian peoples moved deeper and deeper into the mountains. During the Tsarist era, the Russians tried to influence the Caucasian region and often kept their army stationed in the Caucasus. But, in comparison to the Chechens who have been fighting against Russian dominance for centuries, the political situation in the territory of Elbrus (currently the Kabardino-Balkarian Republic) has always been stable. Kabardian diplomats always maintained good relations with Russia. It was the Kabardians who joined Russia of their own free will in 1557, as the first Caucasian tribe. Today, the politicians in the region are still concerned with keeping good relations with Russia. The political situation in the Kabardino-Balkarian Republic is quiet and tourists visiting the Elbrus region find no signs of political instability.


CLIMATE AND WEATHER OF ELBRUS

The climate of the region is determined by the massive mountain chain and closeness to the Black Sea. The weather is changeable: it can be sunny one day and rainy the next (with snowfall at high altitudes). However in general Caucasian weather is much more stable than, for example that of the Alps. Rapid deterioration with blizzards and temperature falls of 10 to 15 degrees C within hours, typical for Western Alps, are highly unusual for the Caucasus.

As a high mountain, Elbrus however is subject to quick changes of weather. Even in July it may be bitterly cold and windy at 3.00am, the time when the ascent usually starts. This means you have to be well prepared and equipped for it, especially with the right footwear.