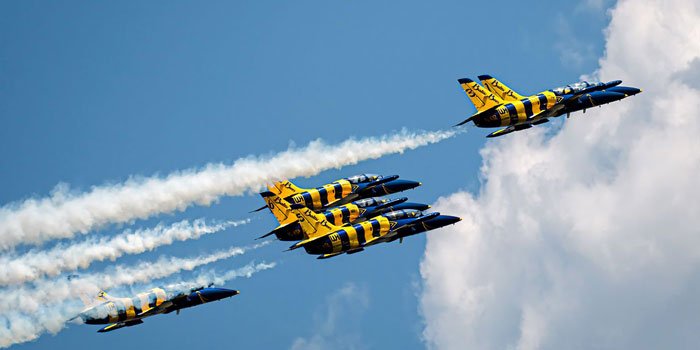 Moscow’s biggest air show, MAKS, (short for Mezhdunarodnyj aviatsionno-kosmicheskij salon) takes place at Zhukovsky International Airport 25 miles from the Russian capital. It takes place every two years on odd numbered dates. First staged in 1911 in St Petersburg, it began life purely for entertainment. Later it moved to Moscow and has been held at its present airfield since 1999.

Over the years it has also evolved into a marketplace where Russian aerospace companies can do some pretty lucrative deals. Alongside this is a conference overseen by the Central Aerohydrodynamic Institute. The air show itself spans six days, three open to the public. There are demonstrations from the Russian Knights and Swifts, the air force’s aerobatics teams. International display teams also perform at the event, wowing the crowds that have gathered below.