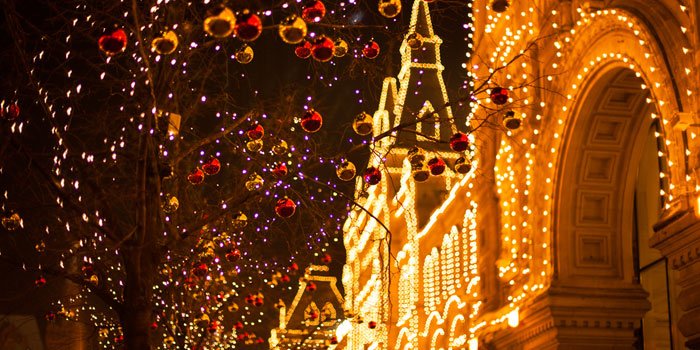 If you love a good party, then head to Moscow in January where you can celebrate New Year not once but twice. As well as marking the date change with the rest of the world at midnight on January 1st, the Russians celebrate the Orthodox New Year two weeks later. To wish someone a Happy New Year, say “S Novim Godom”. By the time you reach January 14th you’ll have said it so much your pronunciation will be pitch perfect.

Christmas falls midway between the two, so you’ll commonly see a decorated fir tree – though here it’s more commonly referred to as a New Year tree. Santa, too, pops up on New Year’s Eve (who cares, so long as he comes with presents, right?) The two new year celebrations are a little different. The first is more of a public party, with fireworks, concerts and TV extravaganzas. Red Square is unrivalled, with the pyrotechnic display illuminating the brightly coloured onion domes of St Basil’s Cathedral. The second is a family affair, centred around a special dinner, which may also involve traditions such as singing folk songs and fortune telling.